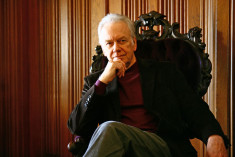 I was born with a gift of laughter and a sense that the world was mad. No, wait — that was Scaramouche, though the same may said of me.
I sold my first story in 1981. Since then I’ve published over thirty books and over a hundred short stories in anthologies and such magazines as The New Yorker, Playboy, Esquire, The Magazine of Fantasy and Science Fiction, and many more.
My work has been adapted for film and TV, and has been published worldwide. I’ve won the International Horror Guild Award, and been shortlisted for the World Fantasy Award (twice), the MWA’s Edgar, and the HWA’s Bram Stoker Award (six times). I write plays as well as fiction.

I’m also a member of Actors’ Equity Association, and often act in professional theatres in my area. The acting has led me to record audiobooks, and I’ve recorded novels by Clive Barker, Joe R. Lansdale, Jack Ketchum, Irving Wallace, Kealan Patrick Burke, and many others, as well as a number of my own novels.
I live, write, and record in a small Pennsylvania town, surrounded by books, movies, recordings, and art, and assisted by my loving and very tolerant wife. And I love to hear from readers…

One thought on “Who is Chet Williamson?”