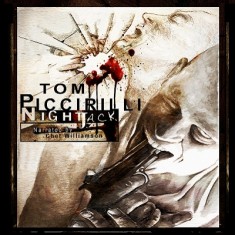 Nightjack, a new novel of horror and suspense by Tom Piccirilli, is now available as an unabridged audiobook with my narration. The book is a dark treasure……and I was delighted to narrate it. What’s it about?

“On the day of his release from a mental institution Pace is taken “hostage” by Faust, Pia, and Hayden, three escapees from the hospital who disappeared after the presumed rape and beating of Cassandra Kaltzas, daughter of the Greek munitions tycoon Alexandra Kaltzas. Each suffers from Multiple Personality Disorder, experiencing complex delusions and sometimes fantastical identities. Pace tries to piece together what happened when apparently one of their alternate personalities tried to kill Cassandra.

Pace himself is an alternate of William Pacella, a man whose wife died in a restaurant fire set by a local mobster for insurance money. William Pacella “dies” so that Nightjack can be born–a new personality who may or may not be Jack the Ripper.”

And it rockets along from there! The seven hour unabridged audiobook is available from Crossroad Press for $12.99, or at Amazon and Audible.com.