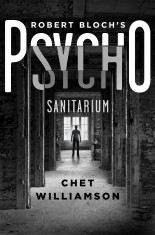 Some time back I was approached by Brendan Deneen of Macmillan Entertainment, who asked me if I’d be interested in writing the first sequel to Robert Bloch’s classic novel, Psycho, since the two that Bloch himself wrote over twenty years ago. The events of the novel would occur right after Norman’s arrest, when he’s sent to the State Hospital for the Criminally Insane. The agent for the Bloch estate had recommended me, and I quickly agreed. After having grown up on Robert Bloch’s written work, and having been terrified by Hitchcock’s film of the novel, how could I turn down the opportunity to continue the story of a character who has become iconic?

What makes it even more exciting is that the book is set fully in Robert Bloch’s Psycho universe, and has no connection whatsoever to the various film and TV sequels and spinoffs that have appeared over the years. This is Bloch’s Norman Bates, back at last.

I spent most of the past year working on the book, and was delighted to have it approved by the publisher and the Bloch estate. It’ll be published by Thomas Dunne Books in hardcover and ebook next April, and readers can pre-order it right here.