Yoohoo! Zombie lovers! You might want to keep your eye out for a film next year based on Joe R. Lansdale’s story, “Christmas With the Dead.” It’s a zombie movie, with a screenplay by Joe’s son Keith, and starring Damian Maffei, Brad Maule, Kasey Lansdale, and lil’ ole me as the eeeeevil Reverend Mac, an escapee from a state mental hospital for the criminally insane who has his equally insane minions (hot damn, I have minions!) sacrifice non-believers to the zombies in an unholy communion.

In late June, I shot for a week on location in Nacogdoches, Texas under the terrific direction of Terrill Lee Lankford, and it was a hoot and a half! I still have a sore throat from screaming when I get et by the zombies, but the footage should be worth the pain! Here’s a out of focus shot of me and Mike Blankenship, one of the zombies who  gets a big chaw outta me. Watch this site for more news of the film and check out the official website here. 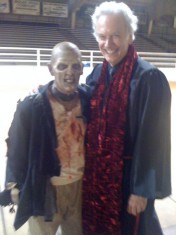 One thought on “Playing the Reverend Mac in Joe Lansdale’s “Christmas With the Dead!””