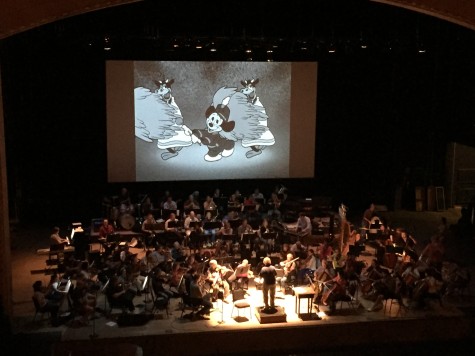 I’m absolutely delighted to be narrating the Hershey Symphony Orchestra’s “The Magical Music of Disney” this Saturday, September 26th, in performances at 2:00 and 7:00. The Hershey Symphony, in the glorious Hershey Theatre in Hershey PA, will be playing an overture of Disney favorites (including the pictured “Mickey Mouse Club March”), and then a series of suites for nine different Disney films — The Little Mermaid, Pocahontas, Mary Poppins, Beauty and the Beast, Frozen, Aladdin, Mulan, Pirates of the Caribbean, and The Lion King.

What makes this so cool is that on the screen above the orchestra, the audience will see footage from the various films, with the live symphonic music synchronized to what’s happening on screen. These films were prepared exclusively by Disney for the Hershey Symphony (earlier versions done by other orchestras had still photos only), so you get to see it here first!

If you live in the Central PA area and have kids, this would be a real treat. Or if any of you adults are just fans of the Disney films, you’ll get a huge kick out of this. We had a dress rehearsal last night (as in the photo) and the orchestra sounds great! Hope you can join us! Here’s the link for tickets…or call the Hershey Theatre Box Office at (717) 534-3405.